I was very much looking forward to attending this symposium at Manchester University, organised by Alison Jeffers and Gerri Moriarty alongside the launch of their recent publication about the British Community Arts Movement “Culture, Democracy and the Right to Make Art”

The book has been reviewed recently by Stephen Pritchard for Artworks Alliance; the symposium brought together some of the contributors to the book and others to discuss the history of the Movement particularly with respect to the concept of Cultural Democracy; the current state of play (with Cultural Democracy rearing its head again); and ostensibly what next for us as possible cultural democrats.

And that’s what drew me to take a day out to go to the symposium. As someone who has been involved in a community arts organisation in Leeds since 1986 (coincidently the year that the Movement apparently ended!) there often hasn’t been enough time (or maybe inclination) to take a step back and consider what and why we are doing the things we do; and what structures beyond our own little empires might help to make a sea-change in the work. It is certainly true that we have been operating in a defensive mode without any feeling of ‘movement’ for a decade, although I do have hopes for an effective Alliance.

But I am also looking to the future; my company, Heads Together Productions, has recently been awarded Explore and Test funding from Paul Hamlyn Fund to pilot a Community Arts Academy: a sector-based coaching programme for emerging community artists and social activists across the north of England. It’s an initiative that has come directly from our involvement with the original Artworks programme and one that excites me greatly.

To work effectively with the next generation of community artists, I think it is key to support the energy and desire that they have but also to give the work context; to make young artists feel part of something as opposed to just the latest set of pioneers. Obviously the aim of the Academy idea is to bring young workers in the sector together. Peer support and learning in a time of overt individualism where every artist is encouraged to be an entrepreneur (social or otherwise) and to take the responsibility and the precarity that can entail. Let’s face it we pioneered the “gig economy” long before Uber came on the scene! But I attended the Symposium specifically considering whether there is a way that we can promote a longitudinal alliance between the Community Arts Movement of the 60s, 70s and 80s; the Participatory Arts story (yet to be written) of the 90s and 00s; and whatever comes out of this exciting and terrifying time of political and social change that we are currently experiencing.

The participants on the day were a fairly mixed bunch in terms of place and to a certain extent in terms of background; but the day was led (unsurprisingly) by academics and researchers. Let me state now I say that without disdain–some of my best friends are now working in Higher Education (when they are not on strike!) I found the day stimulating in terms of both ideas and analysis; everything from the Great British Class Survey to a focus on capabilities rather than the deficit model to grant addiction to dividualism (no spelling mistake there—one to look up!)

But back to the key focus for me—what were the key themes, the clear learning to take forward. I asked the question of one of the panels. The only real answer I received was from Gerri Moriarty in the audience. In a way that wasn’t so surprising. When I spoke to her about writing the book, she didn’t express any great joy in doing it, but had embarked on the project rather because she saw there was a gap and she could see the importance of learning from what had happened.

So—let’s hear it for Cultural Democracy? I think so. Interestingly there is a Movement again—one which has come out of The World Transformed conference running alongside the Labour Party conference in Brighton last year and is specifically promoting Cultural Democracy. I’ve been looking though the Manifesto and there’s plenty of good words and ideas there. But as Bert Mulder once challenged me many years ago, talking not about the arts specifically (he was once the IT advisor to the Dutch Parliament). Why is it that whenever we take good ideas or even good practice and try to make strategies from them, the whole thing dies before our eyes.

So for me the Symposium was a day of ideas and making sense of current practice from a better understanding and analysis of what went before. The session towards the end of the day on ‘the next steps’ went all participatory, with small groups creating a series of haikus. Of course we will probably need more than 17 syllables but I came away with a brain swimming in ideas and thoughts, a desire to make sure our history keeps being recorded and argued over, and a belief that working in alliance at this point is key to forging new directions, within and without of our sector and as part of a forward-facing historical movement. 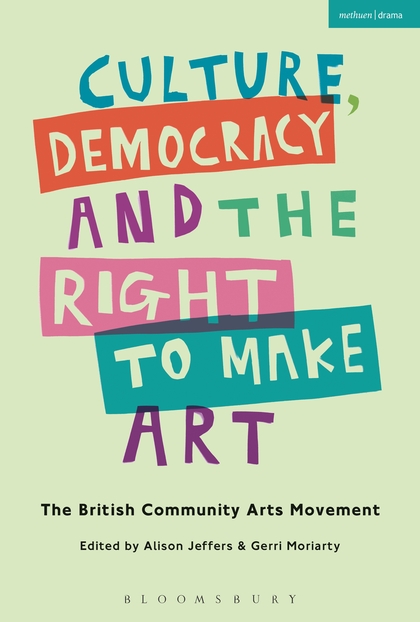