It was an unlikely series of events that led Tony Macaluso to Chapel FM Arts Centre here in East Leeds.  Half a year ago he was in his hometown of Chicago directing a radio network that creates arts programs for stations around the world and guiding a large oral history archive project.

Now, having started on November 1 as the new Chapel FM Arts Centre’s co-director working in tandem with Adrian Sinclair, he is soaking up the history and culture of East Leeds, learning about the culture of Chapel FM, and starting to talk with staff, participants, hosts, and friends of the centre about visions for the future…

What brought you to Chapel FM? 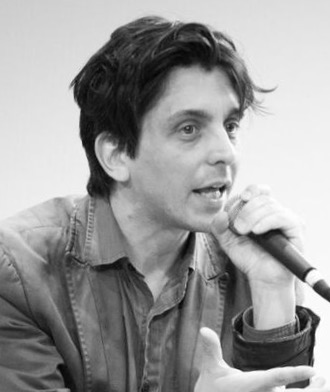 My family and I came to Leeds in the middle of this summer.  It was a unique moment in life when the stars seemed aligned for making a big change: I just completed the first phase of a big oral history archive project, my wife is a scholar working on refugee and migration issues who was offered an opportunity to lecture at university here in Leeds, and our son was about to turn ten and we wanted to give him new perspectives on the world.  So we decided to move.

We had a little circle of friends-of-friends who welcomed us to Leeds.  I began to ask them about organizations in town that were doing great artistic and community work.  A number of people said some variation of, “You should really check out Chapel FM… it’s out in East Leeds.”  So one evening I ventured out on the number 4 bus from Kirkgate Market, and showed up for an event about radio documentaries and experimental animated films. I was delighted from the moment I saw the glow of colourful lights from the stained glass windows.  The warm vibe and hubbub of conversations going on the lobby, dreamlike performance space upstairs, the audience with a mix of ages and styles.

I was hooked, came home, began exploring the many online radio programs, found people talking about poetry, experimental music, local business, video games, radio drama, blues and folk, even a show entirely in Polish!  Then I discovered a whole bundle of classes and art ensembles.  A 24-hour Musicathon! Hosting conference for community artists from other countries!

And then?  Well, one day the website had an announcement: “Job Opportunity” and I began the adventure of learning much, much more about what an incredible place this is.

What led you to a career in the arts?
I grew up in a suburb of Chicago where a great public library helped me fall in love with books.  I wrote lots of stories.  Later I got involved with theatre and writing for school newspapers.  When I went to university I studied journalism and Chinese and after graduating spent a year living in China, where I formed a theatre company with a group of students.

I came back to the United States and went to graduate school to study Theatre History where I explored the long history of comedy, tricksters and clowns: from ancient Greece to Commedia dell’Arte to Charlie Chaplin, Buster Keaton and the Marx Brothers.  I was about to start writing my PhD dissertation but felt the call for something different and went to Chicago where I joined a puppet/street theatre company called Redmoon Theater and later worked for The Neo-Futurists.  That led me to work with many other theatre companies and eventually helping run a big outdoor festival, the Grant Park Music Festival.

What were some of your key inspirations?
To pick a person: I had a Great Grandmother, Delima Rearborn, who lived to be 99. When she was a teenager in the 1910s she ran away from her farm in Michigan and married a vaudeville performer and they toured the American Midwest.  When I was growing up she was still alive, playing music and telling amazing stories, jokes, and bits of cultural lore.  I have a copy of a journal she kept when she was on the road. It’s a great reminder of how certain kinds of curiosity can flow down through the generations.

A few other experiences that shaped and inspired me: I’ve been fortunate to travel and live abroad (not only China, but Italy and Eastern Europe); working on various political campaigns (including Barack Obama’s first campaign to become a senator from Illinois); leading hundreds of tours about Chicago architecture and history from a riverboat as a side-job; writing a book about the history of outdoor concerts in Chicago; and serving on the boards of Opera-Matic, an arts organization that activates public spaces in west-side Chicago communities and Media Burn Archive which collects, restores and distributes documentary video and television created by artists, activists and community groups.

What’s on the agenda for your first months as co-director?
Of course learning as much about the people, the complex communities of Seacroft and the rest of East Leeds.  Also helping map out plans to add new radio programs and exploring how to potentially bring the station onto air via a new FM frequency, working with other staff to keep the many education courses strong (I’ll be teaching some broadcasting courses), helping curate and promote live events, and seeking to strengthen partnerships with other organizations around the city and beyond.

An accomplishment you are especially proud of?
A really meaningful project for me personally was leading the creation of the complete radio archive of oral history legend Studs Terkel in my previous role at WFMT in Chicago in partnership with the Chicago History Museum, the Estate of Studs Terkel, The New Press, and The Library of Congress.  Terkel was an incredible radio and oral history legend and a big influence when I was young. After moving from Chicago, I have continued to work on Studs Terkel’s legacy as Visiting Scholar for the Studs Terkel Center for Oral History at the Chicago History Museum.

Any surprises after starting to work at Chapel FM?
I am struck by how the design of the building, as it was renovated, creates a flow of open interactions and conversations among the staff, participants, and visitors.  Rather than being closed away in an office, sharing a common workspace means that there’s a constant reconnection with the reason that the Chapel is there in the first place.  In a typical hour, there might be group of singers showing up for a choir practice, a local artist looking to arrange a gig, staff from another community centre talking about an issue confronting the neighbourhood, a delegation going out to visit a local school, a random passer-by dropping in to learn what goes on in this building with the vibrant-coloured glass windows, and more.  There’s a sense that a new idea or collaboration could be born at any moment.

If you would like to talk to Tony about new ideas, collaborations or anything else, you can email him at tony@headstogether.org